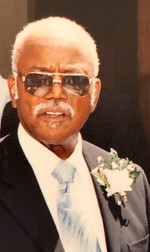 Virgil Lee was born February 17, 1932 in Clarksdale, Mississippi to the parents of LC. and " Rosetta" Lottie Lee. He was the eldest of nine children born to this union; five brothers and three sisters. All preceded him in death with the exception of one surviving sister Ernestine Lee Ellis.

Shortly after graduating from Clarksdale High School he
enrolled at Lincoln University in Jefferson City, Missouri to study law. In 1950 Virgil enlisted in the United States Air Force.

In December of 1954 he married Ossie Dell Davenport and to this union there were four children: William, Rita, Zachary and Marcus Lee. “Dad” was the name the children affectionately and lovingly called him.

Around 1954 Dad was baptized by Reverend W. B. Rouse at the Mount Zion Missionary Baptist Church in East St Louis, Illinois.
In 1963 “Dad” was ordained Deacon in Madera, California by Reverend R.C. Nelson

January 21, 1971 after 20 years and 21 days of extensive travelling throughout the United States and numerous foreign countries, Dad retired from the United States Air Force as a Technical Sergeant (TSgt) with an honorable discharge and the family settled in East St Louis, Illinois.

Later in 1991 he united in marriage with Jo Alma Houston. To this union no children were born, but she brought into this marriage six loving children Valerie, Connie, Herman, Markeith, Gregory and stepson, James. (James now deceased)

Virgil worked along-side Jo Alma at the Diner’s Delight Restaurant for many years until his health began to fail.

On December 21, 2019 he transitioned to be with our Heavenly Father

He leaves to cherish his memory: loving wife Jo Alma,