Bom-Wrapper
About An Amazing Life|Help 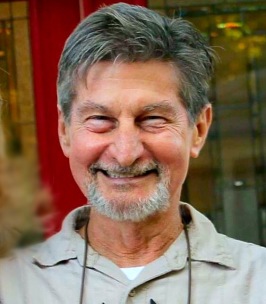 Print
It is with great sorrow that we share tragic news of the death of Richard Edgar Woodcock. Born July 3, 1946 in St. Louis, Missouri, Richard died peacefully on November 19, 2018 surrounded by his family. He was the kind of health nut and workout enthusiast most people resent – you know, the guy who checks his Fitbit daily and has washboard abs at 72 years old. His unexpected passing was the result of a ruptured brain aneurysm.

Richard was the oldest child of Vernon and Ruth Woodcock of Washington, Missouri. He graduated from Northwest High School in House Springs in 1964. He designed and painted NHS’s original lion mascot and went on to study studio art at the University of Missouri.

His professional life was driven by his creativity, gifted artistic skills and a willingness to be a fearless innovator. An extremely talented photographer and videographer, Richard founded Brass Shutter Studios in 1973. Brass Shutter grew to become one of the largest commercial photography and video studios in St. Louis, garnering regional and national corporate accounts. Richard created new set construction methods, lighting techniques and mobile video capture methods – this included the first helmet-mounted video camera system for skydiving videographers in 1978. In other words, he invented the first extreme sports video capture system 30 years before GoPro. Amazing huh? Yeah, Richard was really awesome. He led the company with his wife, Denise O. Scherer for over 30 years.

Did you notice that Richard was a Skydiver? He made of over 300 jumps from planes, helicopters and even a hot air balloon. This dude did a lot of cool stuff and always made time to help his friends and family. Loved ones described him as reliable, dependable, and responsible. Richard constantly found ways to say “yes”. He was the kind of rock-solid individual who listened, lead by example and let his actions define his character.

Richard always made family his priority. He was an amazing husband, father, grandfather, son, brother and uncle. Over the last 17 years, he had a devoted focus on his four grandchildren. He knew they were perfect and talked about them all the time. It was important for him to make sure every birthday and Christmas were special and well celebrated. He loved to search for the unique gifts that fit the recipient’s personality and interests - from Honda Three-wheel ATVs to petrified dinosaur poop. Richard made sure his gifts were wrapped like elegant Victorian parcels…even when it contained the poop.

He was a true Renaissance man. Richard was an artist, photographer, carpenter, designer, dancer (debatable), crafter, historian, genealogist, marksman, gourmet cook, airport taxi, grandkid chauffeur and the official scarier of his niece’s young children. He literally could do almost anything and often did, with the most wicked sense of humor. Of course, you build strong character when you live your life as Dick Woodcock.

Good thoughts and best wishes are appreciated by his family, and memorials in lieu of flowers can be directed to the St. Louis Regional Arts (RAC) Commission or any legitimate group promoting a smart and caring democracy.

Richard’s Celebration of Life will be from 3:00 to 7:00 pm this Friday, November 23 at his son’s home. Family and friends are all welcome. Tributes and reflections will be shared around 5:00. Please feel free to bring you favorite stories and pictures.

To send flowers to the family of Richard Edgar Woodcock, please visit our Heartfelt Sympathies Store.

We encourage you to share any memorable photos or stories about Richard. All tributes placed on and purchased through this memorial website will remain on in perpetuity for future generations.

Please accept our most sincere condolences on the death of your father. May his soul rests in peace. Please be assured that our thoughts are with you and your family.

Thank you for sharing!

Provide comfort for the family by sending flowers.

Or use your email:

Provide comfort for the family by sending flowers.

Connect with families at their time of loss. By subscribing to email updates, you will receive two daily updates containing all new stories, photos, candle lightings, condolences, and more.