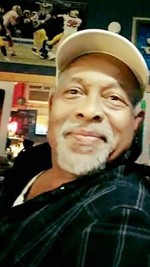 Anthony had a way of exhibiting his zeal to party and simply celebrate life. Anthony always found a way to let it all out and accept all that life had for him. He was committed to serving and assisting others and that was evident through his most recent employer, NHC. He was employed in their Food, Nutrition and Dietary Department.

Anthony was introduced to religion through the Catholic faith.

In most instances, Anthony was the life of the party. His keen insight on life was impeccable and he respected and accepted all people. Anthony truly never met a stranger. His love for family and friends was evident through his participation in many family gatherings, dinners/parties, trips, and other outings. He enjoyed spending time with his folks and assisting with their life’s happenings.

Anthony was united in Holy Matrimony to Ms. Veronica Hennings on July 10, 1987. No children were born to their union, however they were blessed to assist with the raising of their nieces; Tiffany Hennings & Markisha Smith. Anthony enjoyed all that life afforded him. He had the pleasure to witness his children become self-sufficient, loving and caring individuals and exceptional parents themselves. Anthony departed this life on Friday, August 30, 2019.